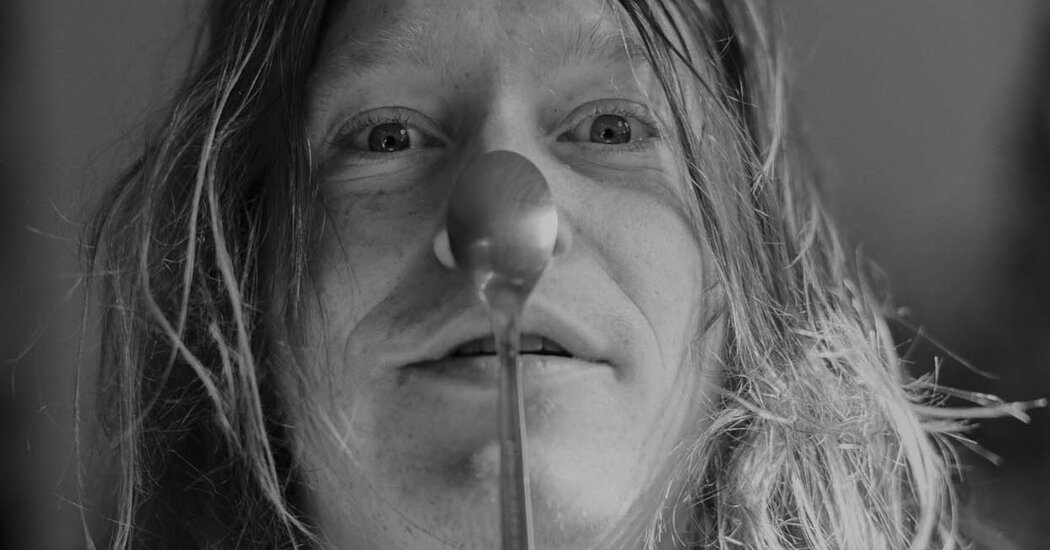 Until the recent events at the Oscars, the film season’s most memorable speech for best actor was Caleb Landry Jones. In July, the Cannes Jones Film Festival awarded its premier male tespian prize for its portrayal of a mass shooter in the Australian drama “Nitram” (now in cinemas and digitally). The 32-year-old actor had been to Cannes twice before and had experienced its nauseating tremors, spurred on by drinking too much, sleeping too little and feeling how the eyeballs scanned his face to assess his significance. (“LA, but 50 times,” he said.) But this time, all eyeballs were attached to him when he grabbed the podium like a faint chaise longue. “I think I’m going to vomit,” he joked. The audience giggled, unsure if his panic was a bit. Then Jones fled the scene, leaving in his wake some exhalation that lingered like dust clouds from a cartoon roadrunner: “I’m so sorry – I can not do this. Thank you very much.”

“I wanted to be invisible,” Jones recalled. “I barely formed words, and I thought, ‘I have to give up.'” He re-established the moment and invited, “Caleb Landry Jooooones,” seal pats and then pantomimes his fluttering heebie-jeebies.

The Texas-born actor who still speaks in a song twang looked exponentially more relaxed the day we talked in the backyard of his 101-year-old rickety apartment building in Los Angeles. In a corner of the city that does not yet have a gentrified name, the people around him (for the most part) do not care if he plays guitar at 02.00, or if he and his girlfriend, the artist Katya Zvereva, lay out paper plates with tuna for orphans cats. Here it’s OK if Jones steels himself for stress by rolling splice after splice in the sunshine, as he did during our lecture. Later that afternoon, he was on his way to the dentist for four root canals. “That’s why I get as charged before I go in as I can.”

“Invisible” is not a word often used for Jones. The red-haired actor has been a clear presence on screen ever since he landed on his very first film audition at the age of 16 for a single role in the Coen brothers’ “No Country for Old Men”, as the boy who cycled up to a bloody Anton Chigurh (Javier Bardem) and delivered the memorable line, “Mister, you have a leg sticking out of your arm.” Jones whined about threats like the racist son in Jordan Peele’s “Get Out”; filled his skin with diseases in Brandon Cronenberg’s cinema horror “Antiviral”; and set himself on fire in the Safdie brothers’ “Heaven Knows What”. For most of his career, he has favored lively pieces for prestigious directors – Jim Jarmusch, Sean Baker, Martin McDonagh, Lone Scherfig, David Lynch – over smaller films that offer more screen time.

Jones is an odd tribe of rebels – not a smart James Dean clone, but a cowlick who can not help doing his own thing. He is at once careful and careless. After a childhood diagnosis of obsessive-compulsive disorder, he became aware of the need to invite entropy into his life. At his home, while his brain spun with details – did he put exactly two teaspoons of red pepper in yesterday’s chimichurri? – he projected disorder: color smeared on pants, crumpled sweater, ruffled goatee. (He really did not seem to have packed a comb for his quirky locks in Cannes.)

Zvereva, who came out during the interview to offer us more coffee, said that when Jones first approached her on the streets of New York, she thought he was homeless, even after she invited him to her studio and he in turn went with her. to his film set, where his director cried happily that Jones had found another person on his wavelength.

Growing up just outside of Dallas, Jones was encouraged to pursue his creativity. His parents, a special education teacher and an entrepreneur, allowed him to draw all over the floor of the home until the plywood was replaced by hardwood planks. His mother enrolled him in ballet and tap, invited him to audition for the local art magnet and offered tea and graham biscuits along with hours of British comedies – “Monty Python” and “Wallace and Gromit” and deeper cuts such as “Only Fools and Horses. “

As a child in church, he was not allowed to read X-Men series, and he did not do so until he played Banshee in “X-Men: First Class.” Although he loves music – and actually just released his second album with tough psychedelia – as an avid teenager, Jones waved Nirvana for the Christian band DC Talk (he once saw them open to Billy Graham). That was until he fixed himself on Bob Dylan and imitated his new idol by shrugging his shoulders and wearing tight pants.

“Things affected me too much,” Jones said. Every new obsession, like Radiohead and Bukowski, has had a way of temporarily changing his artistic temperament. “That’s why it’s good to find acting,” he added. Exploring a character – especially a cryptic one whose choice defies expectations – gives him the language to wrestle with his own desires.

“He’s the most immersive actor I’ve ever worked with,” Nitram director Justin Kurzel told Zoom. “He’s a real artist.” Although it’s hard to say it to Jones in the face. “When you praise Caleb, I can see he’s uncomfortable.” Their film is inspired by the 1996 mass shooting in Port Arthur, Tasmania, which motivated the Australian government to approve the national firearms agreement banning automatic and semi-automatic weapons. It dominated the Australian Academy of Cinema and Television Arts Awards in December and gave Jones a statuette for the second best actor. (This time he could record their speech in advance.)

His character – simply called Nitram, not to compete for the actual shooter, who remains in prison – goes through the film as a frighteningly oversized child. He rages and sours; he feels rejected for reasons he can not always control. And at the end of the film, he finds a community that welcomes him (and his money): arms deals, which play nicely against the visibly unstable man and sell him whatever rifle he wants.

Jones, who had been asked to waste during the Australian photo shoot, secretly chose to eat meat pies so that he would take up more space. “No, we’re going to ‘Fat Baby Man!'” He said, laughing. Much of the film was improvised. They would play a scene out loud and then try it out silently. , angry young man, assigned Kurzel Jones tasks: film himself with a video camera, scribble in a diary. “I drew myself with muscles and wrote” sexy “next to it, Jones says.

“I’m not sure if I really met Caleb,” his “Nitram” co-star Judy Davis said by phone. “He always used an Australian accent.” During their punitive scenes as mother and son, Davis, who was himself a prize-winning film veteran, admired Jones’ openness and lack of claim. “Probably the most responsive actor I’ve ever worked with.” When she was not at the filming location, she tried to get him to accidentally use his real voice. Only on her last day, before the filming ended, did Jones scare her by breaking the character to run up for a goodbye hug.

As the recording approached its final explosion of violence, which Kurzel chose to keep off the screen, Jones became increasingly withdrawn. The local crew, painfully aware of the actual tragedy, began to keep their distance from Jones, especially after the guns arrived for filming. “I did not find many friends,” Jones said.

It can sound painful for an artist to feel so alone halfway around the globe away from home while handling such intense material.

“But it’s great!” Jones insisted. “It was really wonderful for me because I do not know how to act.” Maybe he should let his awards have the last word.