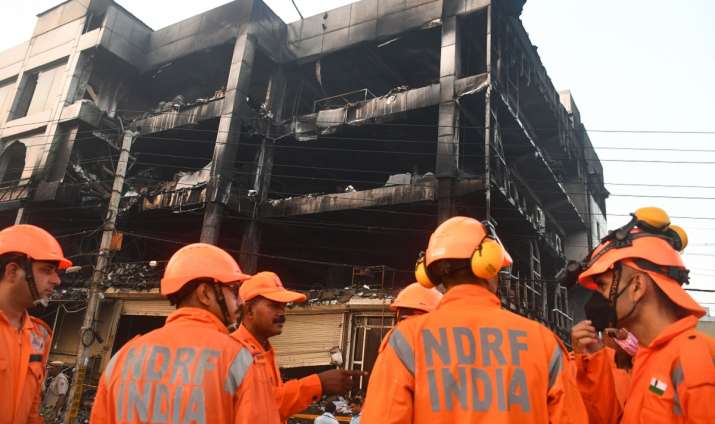 According to the FIR, which was registered in connection with the case, “On Friday, around 4 pm, a motivation program was arranged for all employees and they gathered on the second floor of the building.”

FIR said that the police received information at 16.45 about the fire and that 100 to 150 people were trapped inside.

Police reached the scene and discovered that a fire broke out in premises number 193, Rohtak main road, opposite pillar number 544, Mundka village, and some people fled from the second floor of the building after smashing the glasses, FIR stated.

There was a basement and four floors in the building. The fourth floor was a residential apartment. The rescue service rushed to the scene and started extinguishing the fire, it states.

During the investigation, it turned out that the building was owned by Manish Lakra, who lives on the fourth floor of the building.

There were shops on the ground floor of the building. A company called Cofe Impex Pvt Ltd was operating on the first, second and third floors of the building. The owners of the company were Harish Goyal and Varun Goyal, it said.

When the fire broke out, many came out of the building after smashing the front glasses, but some of them got stuck inside after the fire spread in the area. There was heavy smoke and fire inside the building and it only has one exit, FIR said.

When the fire was under control, police and firefighters entered the building and moved the bodies to the hospital from the second floor, it said.

The building only has one entrance and exit gate, the police state.

Local investigation revealed that the owners of the building are Sushila Lakra, her son Manish Lakra and his wife Sunita Lakra. While Harish and Varun rented the property for the business, police said.

According to DCP Sameer Sharma, an FIR has been registered against the owners of the CCTV camera packaging unit under sections 304 (penalties for non-homicide), 308 (attempted felony), 120 (conceals design to commit crime). punishable by imprisonment) and 34 (common intent) of the Indian Penal Code.

(With input from PTI)