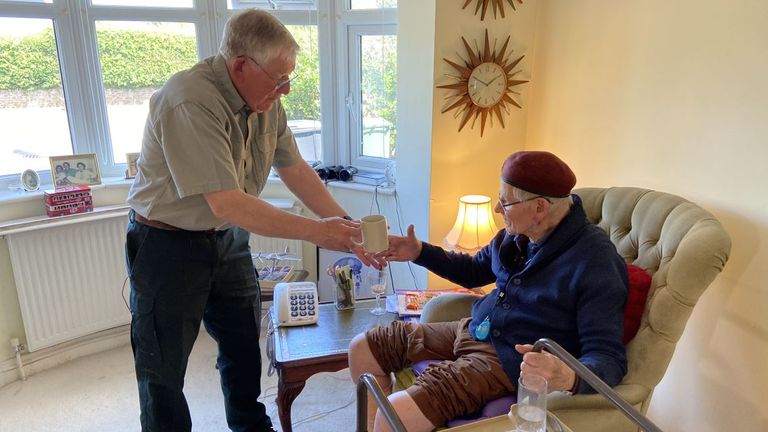 The last time Len Jenkins was found wandering the streets near his home in Portishead, a worried stranger made sure he was returned safely.

But Len’s son, Keith, is constantly worried about his 94-year-old father.

Lens’ dementia means that he does not always remember where he is. His carer has put up signs on his front door that tell him not to go out alone but he still forgets sometimes.

Keith, 76, lives 160 km away and is still working, so he can not look at him constantly.

But he now has a new way of keeping an eye on his father. Len was selected by Avon and Somerset Police to receive one of 30 new GPS tracking devices distributed to people living with dementia.

They are given to people who are most at risk of disappearing. This means that both families and the police can log in to an app and track their whereabouts.

“I can relax a little more,” says Keith. “I can relax because I feel that everything is in place to help him as much as physically possible.”

“And so the systems we have set up here I think are the best compromise. He is at home, he is happy and in my conscience I have done everything to keep him safe.”

The project was the idea of ​​Sergeant Stuart King who saw that there was a need to do something to help.

“During the last 18 years of my police service, it has been a regular occurrence and in fact I have seen it more in recent years where we get more and more calls to people with dementia who are found by members of the public, either lost or in an emergency. , says Sergeant King.

“And there are some incidents that I have also been involved in that have stuck with me. Some have ended up in tragic circumstances and others were people living with dementia who have traveled through cities to try to find childhood homes that are no longer there.

“So it was this kind of incident that made me look for a solution to this to better protect people.”

The units were funded by local companies Bristol Water and Wessex Water.

Stuart has already been contacted by police forces across the country who are keen to launch a similar system.

There are currently around 900,000 people in the UK living with dementia, according to the Alzheimer’s Society, but that number is projected to increase sharply to 1.6 million by 2040.

The charity’s policy director, Gavin Terry, says that with the numbers rising, there is a need for new ways to support people.

“Innovative technologies, like this initiative, are really important in helping to do that,” he says.

“It’s also a really good example of how what’s currently available in everyday technology can be put to good use in helping keep people safe, helping their loved ones, supporting and caring for them, improving their well-being and in Many cases help extend their independence.

“There are some ethical considerations. And there should always be some really clear guidelines on how this type of technology is used, especially for people who lack the ability to make decisions for themselves.”