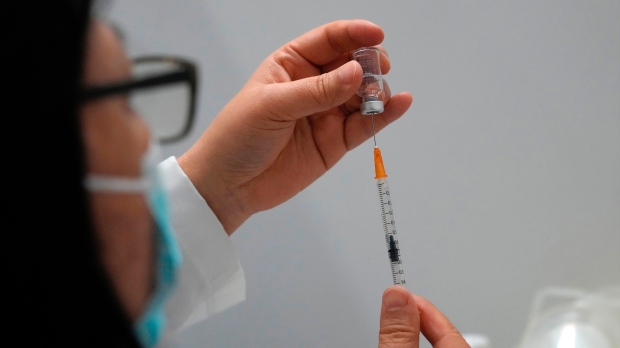 The World Health Organization (WHO) is investigating rare reports of people getting tinnitus and hearing loss after receiving a covid-19 vaccination, according to a newsletter report published by the health authority.

Tinnitus and hearing loss, including sudden cases, were reported to VigiBase, the WHO’s database of suspected adverse drug reactions. A total of 37,529 cases from 86 countries were flagged as a signal on November 18, 2021, according to the WHO.

A “signal” is defined by the WHO as reported information on a possible causal link between a side effect and a drug, where the link is unknown or not previously well documented. The authority emphasizes that the signals are uncertain and also preliminary.

Nearly 11.3 billion doses of a COVID-19 vaccine have been administered around the world, according to CTVNews.ca’s vaccine tracker, making these reported cases very rare.

For these early cases, the WHO said that alternative causes were not identified for most of the patients, although some may have had contributing diseases such as allergies, high blood pressure, previous hearing loss and other autoimmune disorders.

“The most commonly reported symptoms were tinnitus, followed by headache, dizziness and nausea, and many patients experienced rapid recovery, while some required steroid treatment. A credible mechanism of action involving the vestibulocochlear nerve has been suggested,” the report said.

“Awareness of this possible link can help healthcare professionals and the vaccinated to monitor symptoms and seek care as needed. As there is still only limited data in the literature providing evidence for this link, further monitoring is required.”

Patients, mostly young and healthy, reported that they experienced hearing problems within minutes to several hours after receiving the vaccine, according to the WHO report. Many of the symptoms were described as tinnitus-like or muffled hearing, and some reports of headaches, dizziness, and nausea. In some cases, the symptoms of hearing developed into partial or complete hearing loss, in some cases documented with an audiogram. Treatment with high doses of steroids was given in many cases.

“Half of the cases noted that the patient was recovering or had recovered from his hearing loss, while no (or limited) additional follow-up information was recorded for the other cases. The evidence for long-term hearing loss is therefore incomplete,” the report said. the earliest cases identified in February 2021.

The first cases showed that hearing loss and tinnitus were more commonly reported by women than men. More than half of the reports identified before February 2021 were categorized as non-serious, while 43 percent were considered serious.

The WHO also noted that in a few cases, other side effects were registered, including facial paralysis or numbness in the face, suggesting that other cranial nerves may be involved in the problem.

“A potential mechanism for covid-19 vaccine-associated hearing loss may be an autoimmune process involving molecular mimicry related to the vaccine’s antigen, or spectator activation of autoreactive T cells that may involve the vestibulocochlear nerve,” the report said. The vestibular nerve is bound to balance while the cochlear nerve is involved in hearing.

Hearing loss is not mentioned in the product label for most of the covid-19 vaccines, but both Pfizer-BioNtech and Moderna list acute peripheral facial paralysis as a rare side effect. Tinnitus is listed as a side effect only for the Janssen COVID-19 vaccine.

Limited analysis of data from the November 2021 update indicated that hearing impairment was not limited to a particular covid-19 vaccine, with cases detected involving most vaccines, the report said.