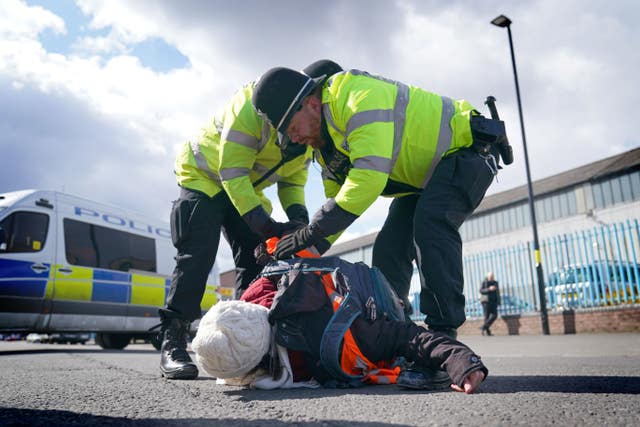 At least 34 climate change protesters have been arrested for blocking oil terminals across the country.

Protesters were glued to roads, hung on bamboo racks and locked in oil barrels and each other from around four in the morning.

ExxonMobil UK, one of the country’s largest privately owned underground distribution networks for oil pipelines, said it closed three of its terminals as a result, and police from at least five forces were deployed to deal with the demonstrations.

The Met arrested 14 activists who broke into a facility on Bedfont Road in Staines, Surrey, while Essex police arrested 13 protesters at various locations, and West Midlands police arrested six people at a terminal in Tyburn, Birmingham.

Police said arrests were made for crimes including aggravated burglary, criminal damage and blockage of the highway.

All those arrested by the Met are still in custody at a police station in west London, the force said on Friday night.

Their officers were called to Bedfont Road at 4.15pm, where protesters had blocked the entrance.

The Met has closely coordinated its response with other police forces and shared information with the overriding priority of resolving each incident as quickly and as safely as possible.

“Such measures taken by activists affect critical national infrastructure and divert many officials from responding to emergencies in their communities.

“Being able to protest peacefully in a democracy is important, but it is also important that it has consequences for those who break the law.

“The Mets’ arrests today, as well as arrests made by other police forces, have minimized disruption across the country.”

Just Stop Oil said in a statement: “The Just Stop Oil coalition calls for an end to the government’s genocide policy to increase British oil and gas production and calls on all those outraged by the prospect of climate collapse and the cost of living the crisis U.S.

“It finances war and kills people in the global south, while destroying the future of young people everywhere.”

Just Stop Oil supporters have also disrupted several football matches in the Premier League in recent weeks, including by running out on the pitches and tying themselves to goal posts.