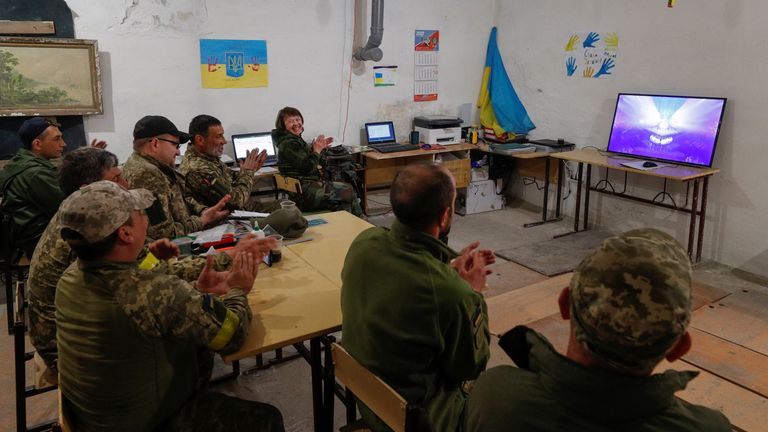 From the moment the show began with a gripping interpretation of John Lennon’s Give Peace A Chance, Eurovision 2022 proved to be just the glittering, glossy antidote that Europe needed.

The message of the night was unity.

And the result, secured by an overwhelming public text message and the telephone, showed that it had been received loud and clear.

Almost every artist expressed solidarity with Ukraine, waving flags and making brief statements on stage. “Peace for Ukraine! We love you!” announced Iceland’s Sister after their appearance.

“Do not lose hope for a better tomorrow,” added the Estonian singer Stefan, as he finished playing his country-like ballad, Hope.

Many participants carried Ukrainian flags as well as their own.

And in a corner of the Ukrainian capital Kyiv, where tired but determined soldiers had long held back a Russian attack, the soldiers found time to crawl around a small TV to listen to the competition and cheer on their countrymen.

Graham Norton, who commented live on BBC One, said: “I find the idea of ​​fans and families coming together during dark times to celebrate music across the continent extremely touching.”

Miroshnychenko explained that his team was forced to move underground “for security reasons” after the TV tower in Kyiv, where he worked for the Public Broadcasting Corporation of Ukraine, was hit by Russian forces.

He said: “You know, war is about life. And our soldiers are fighting for our lives. And not just ours, but for the whole life of the civilized world.

“So, they told us before Eurovision – just do it, just celebrate, just give us that victory.”

The winner of the competition is traditionally the host of next year’s final, but with fierce battles still going on in Ukraine, it is unclear where 2023 will be held.

When it was suggested on Twitter that if Ukraine could not host it, then Britain – which came in second place – should offer it, Defense Minister Ben Wallace replied: “One way or another it will be in Ukraine!”

And it has become an even more prominent point because Russia through its invasion has falsely tried to claim that Ukraine does not have its own unique culture.

Former Bucks Fizz winner Cheryl Baker tweeted: “Wasn’t this the best @Eurovision in years? …. It was a show of love, joy, inclusion and no enmity.”

Rest assured, the competition was also its usual mix of camp, kitsch pop and anxious ballads.

The grand finale began with an energetic performance with flashlights and projections of David’s sculpture by Michelangelo from the Czech We We Domi who sang Lights Off.

Finland’s rock group The Rasmus began their first appearances with a powerful version of Jezebel, tearing off their shirts in the middle of the show.

Armenia’s representative, Rosa Linn, made an emotional appearance with her song Snap on a stage with a bed, lamp and chair all seemingly wrapped in a white toilet roll.

Marius Bear from Switzerland delivered a raw interpretation of his song Boys Do Cry with simple lighting in the background while French Alvan and Ahez had fire on stage to perform their song Fulenn.

At the same time, Norway’s Subwoolfer dressed in their now infamous yellow wolf costumes while performing a synchronized dance number and singing Give That Wolf A Banana.

After the competition, where Britain came in second place, Prime Minister Boris Johnson tweeted: “Congratulations to Ukraine for winning the 2022 Eurovision Song Contest.

“It is a clear reflection of not only your talent, but of the unwavering support for your struggle for freedom.

“Incredibly proud of @SamRyderMusic and how he brilliantly represented the UK tonight.”

Sam Ryder barely missed joining Katrina And The Waves and Bucks Fizz to give Britain its sixth win since 1957.

But he was ecstatic about the result: “There is so much gratitude, what an experience,” he said.