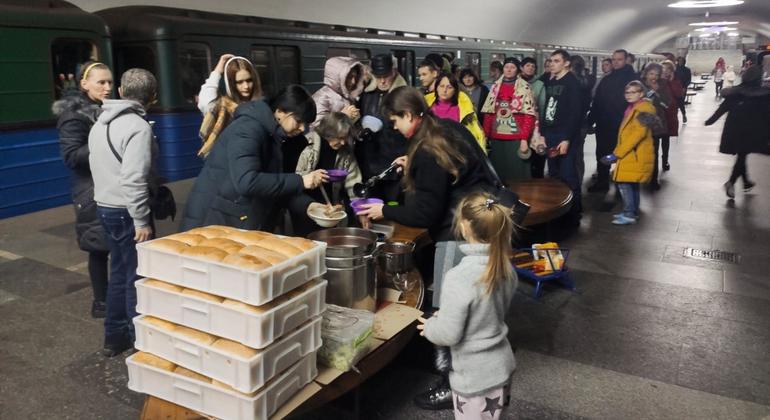 Vladimirova is an accountant and former teacher at Kharkiv University. Together with her daughter and mother-in-law, she arrived in Lisbon on a humanitarian flight organized by the Portuguese government on 14 March.

With the help of volunteers, they found a local family who were willing to share their apartment while seeking official refugee status. More than 22,700 other Ukrainians and third-country nationals who previously lived in Ukraine have been granted temporary protection status in Portugal.

Vladimirova spoke to UN News on March 24, a month after the Russian invasion of Ukraine.

“I come from Kharkiv, which is now a very dangerous city. It is the epicenter of this war. Today is an emotional day for me, because it’s been a month since I left home. I can still imagine our apartment and all the belongings we had to leave behind.

Before the war started, I suggested that we leave the country, but my husband said “no, it’s okay, this is the 21st century, how is war possible?”. But for safety’s sake, I prepared our documents. Then, on February 24, my husband woke me up and said, “It’s starting!”

When we left the city, we did not leave Ukraine immediately, because we thought we could return home after a few days.

We ended up moving between many Ukrainian cities, where many people helped us. Our first stop was Dnipro, where one of my husband’s employees let us live in his apartment. But we heard sirens after the first day, and decided to move on.

My husband was told he was not allowed to leave the country, and he asked me to leave without him. I said I loved him and that I could not leave him. This was in Kryvyi Rih, and he’s still there.

To trust the comfort of strangers

But I had to go. I told him he would get his mother to leave Kharkiv and join us in Kryvyi Rih, and then we planned to get out of the country, Oleksandra, my mother-in-law and I.

Before arriving in Portugal, we drove to the Ukrainian border and crossed into Romania. We knew no one there, and we asked the Red Cross for help. They found a place for us to spend the night.

Then we drove to Bucharest, where a humanitarian flight was arranged, to take us, and the other Ukrainian refugees, to Portugal.

We have received help from so many volunteers along the way. In Romania, they would cook breakfast for us, without asking for anything in return. In Portugal, volunteers met us at the airport and helped us find an apartment.

Our host in Lisbon, Maria, is so beautiful and kind. She has explained everything about Portugal, and what I should do to find a school for my daughter, and how I should go about getting a job. Her friends have also helped by giving us clothes.

Even though she’s only four, my daughter knows that there’s a terrible war going on at home, that there’s a shooting going on. She asks her grandmother why her grandfather is not here. She says he should come to Portugal because Kharkiv is too dangerous.

My biggest fear is that I will never see my husband again. ”

This interview has been edited for clarity and length