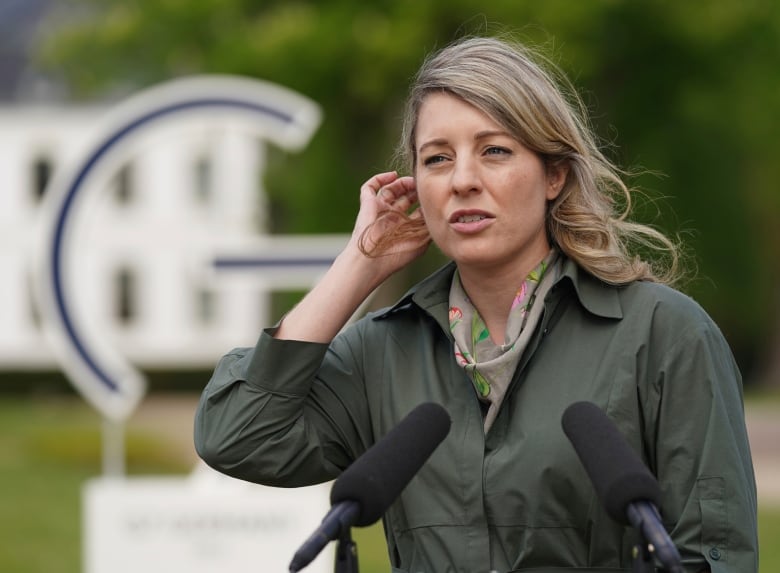 A group of seven foreign ministers promised on Saturday to strengthen Russia’s economic and political isolation, continue to supply weapons to Ukraine and address what Germany’s foreign minister described as a “wheat war” waged by Moscow.

“After meeting at a castle estate in the Baltic Sea resort of Weissenhaus, ministers from Britain, Canada, Germany, France, Italy, Japan, the United States and the European Union promised to continue their military and defense support for as long as necessary.”

They would also address what they called Russian disinformation aimed at blaming the Western world for food supply problems around the world over economic sanctions against Moscow and urging China not to help Moscow or justify Russia’s war in Ukraine, according to a joint statement.

“Have we done enough to mitigate the consequences of this war? It is not our war. It is a war by Russia’s president, but we have a global responsibility,” German Foreign Minister Annalena Baerbock told reporters at a closing news conference after three days of Call.

The key to putting more pressure on Russia is to ban or phase out the purchase of Russian oil with EU member states, which are expected next week to reach an agreement on the issue, even though it is still at this stage, Hungary opposes.

“We will accelerate our efforts to reduce and stop dependence on Russian energy supplies and, as soon as possible, build on G7 commitments to phase out or ban the import of Russian coal and oil,” the statement said.

Ministers said they would add further sanctions against Russian elites, including economic actors, central government institutions and the military, enabling President Vladimir Putin to “lead his election war”, which began on February 24.

The goal of getting grain out of Ukraine

The meeting in northern Germany, which was attended by the foreign ministers of Ukraine and Moldova, also raised concerns about food security and fears that the war in Ukraine could spread to its smaller neighbor Moldova.

The G7 warned that the war in Ukraine is fueling a global food and energy crisis that threatens poor countries. They said urgent action was needed to unblock grain stocks that Russia was preventing from leaving Ukraine.

“Russia’s war of aggression has generated one of the most serious food and energy crises in recent history that now threatens the most vulnerable around the world,” the group said.

Baerbock said the G7 would work to find logistical solutions to get important raw materials out of Ukraine’s stocks before the next harvest.

“People are going to die in Africa and the Middle East and we are faced with an urgent question: how can people get food around the world? People are asking themselves what will happen if we do not have the grain we need that we used to come from Russia and Ukraine, “said Baerbock.

Get “perpetrators” to pay to rebuild

Canadian Foreign Minister Mélanie Joly said there was a G7 interest in the idea of ​​seizing assets and selling them to help rebuild Ukraine.

“It is fundamental that the reconstruction of Ukraine is funded by the perpetrators of this war. There is a great deal of interest on the part of the G7 members. We have definitely had the conversation about this,” Joly said on Saturday in a media review.

Joly said reconstruction could not be done without demining and that Canada would help identify landmines in Ukraine and educate the population on the issue.

Attention is now focused on Berlin when the ministers meet later on Saturday, Sweden and Finland are preparing to apply for membership in the transatlantic alliance, and are threatening retaliation from Moscow and objections from NATO member Turkey.

“It is important that we have a consensus,” Joly told reporters when asked if Turkey might block their accession.

“As far as Sweden and Finland are concerned, Poland is very positive about joining NATO.” Poland’s Deputy Foreign Minister Marcin Przydacz goes on to say that his country supports an open door policy as countries like Ukraine “wait in line”.

Turkey has not closed the door for Sweden and Finland to join NATO, but wants to negotiate with the Nordic countries and put down what is seen as terrorist activities, especially in Stockholm, Turkish President Recep Tayyip Erdogan’s spokesman said on Saturday.

“We are not closing the door. But we are basically addressing this issue as a matter of national security for Turkey,” said Ibrahim Kalin, the president’s top foreign policy adviser.

Erdogan surprised NATO members on Friday when he said that it was “not possible” for Turkey, which has NATO membership, to support an expansion of the alliance because Finland and Sweden were “home to many terrorist organizations”.

Top diplomats from Finland and Turkey hold talks in Berlin to try to resolve the differences, said the Finnish Foreign Minister.

“I am sure we will find a solution,” Pekka Haavesto told reporters when he arrived in the German capital, adding that he had spoken to his “good colleague” Turkish Foreign Minister Mevlut Cavusoglu by telephone on Friday.

Every country that wants to join the North Atlantic Treaty Alliance needs the unanimous support of the members of the military alliance. The United States and other member states have sought to clarify Ankara’s position.

Allies will also examine security guarantees for Finland and Sweden during a ratification period that can take as long as a year, during which the Nordic countries are not yet protected by NATO Article 5, which guarantees that an attack on an ally is an attack on everyone.