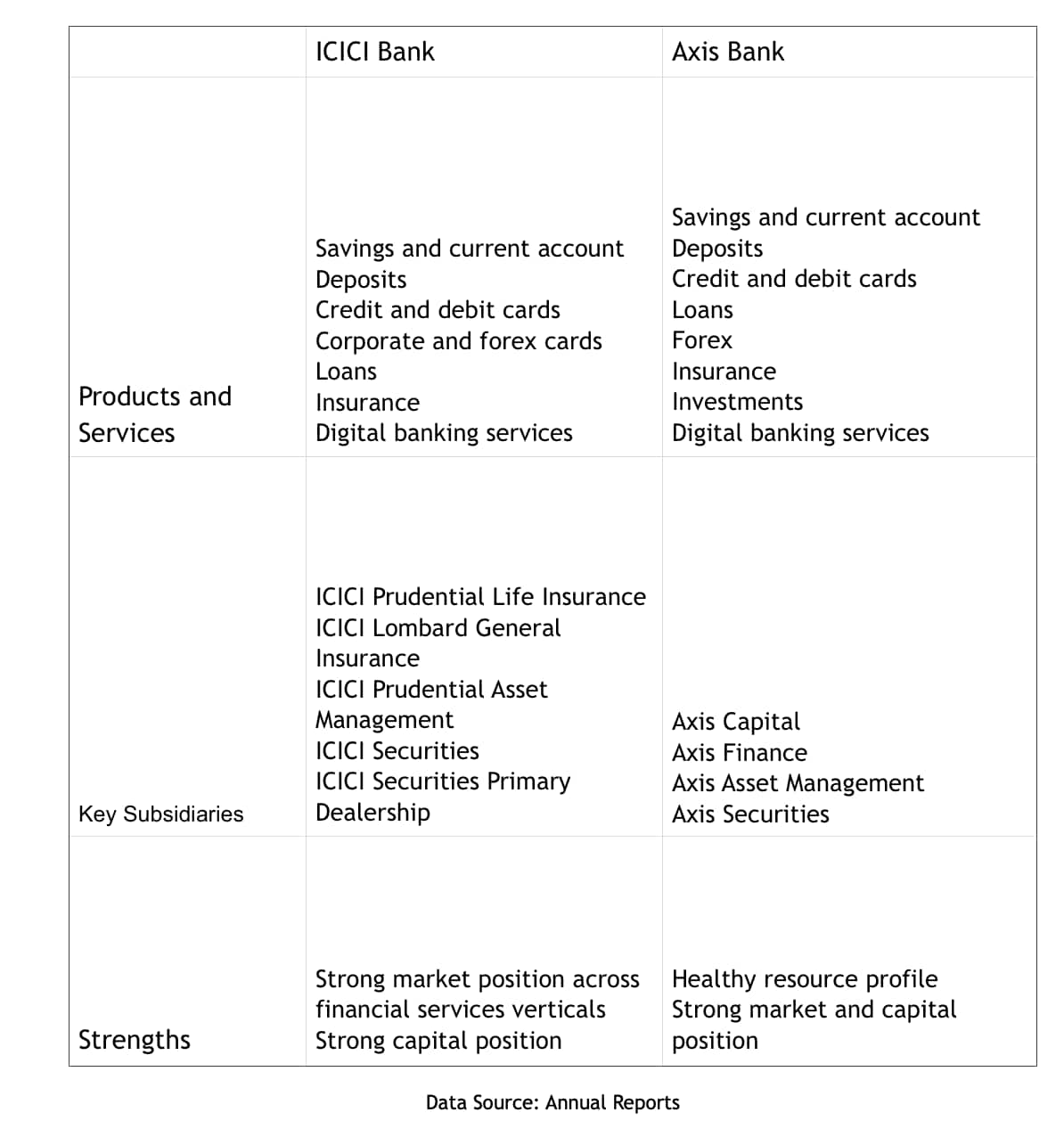 Though people initially feared digital banking, they quickly adapted to it making it easy for the banks to provide services at low costs.

With the working population growing their disposable income will also go up and the use of digital banking will further surge, making it easy for the banks to grow further.

In this article, we compare two banks, ICICI Bank and Axis Bank, that are at the forefront of leveraging technology to grow their businesses.

ICICI Bank is a large private sector bank in India. It offers a diversified portfolio of financial products and services to retail, small and medium-sized enterprises (MSE), and corporates.

Through its subsidiaries, it has a wide presence across financial services such as insurance, asset management, merchant banking, and brokerage.

Axis Bank, on the other hand, is the third-largest private sector bank in India.

It offers an entire range of financial products to its key customer segments such as large and mid-corporates, micro, small and medium-sized enterprises (MSME), agriculture, and retail.

The bank also offers asset management and brokerage services through its subsidiaries.

It has been at the forefront of offering digital banking services to its customers and is adopting new technologies such as the cloud to improve the customer experience.

For a bank, interest is the major source of both income and expense. It earns interest on loans and advances and pays interest on deposits.

The net interest income for ICICI Bank has grown at a CAGR of 12.4% in the last five years, and Axis Bank saw a slightly lower growth of 10.1% during the same period.

For ICICI Bank, an increase in the volume of interest-earning assets coupled with a lower cost of deposits drove the growth of net interest income.

On the other hand, Axis Bank’s growth in net interest income was led by an increase in loans and advances, but this was partially offset by a higher cost of deposits and lower yield on assets.

The profitability of a bank can be assessed using the parameters – operating profit margin and net profit margin.

Net profit margin, on the other hand, is the total profit earned from operating and non-operating activities as a percentage of revenue.

The higher the profit margins, the better.

ICICI Bank is again leading in terms of net profit margin with a five-year average of 15.4% against 6.6% of Axis Bank.

ICICI Bank is again leading in terms of net profit margin with a five-year average of 15.4% against 6.6% of Axis Bank.

For a bank, deposits are the primary source of funds. This is because a bank uses deposits to disburse loans and earn revenue in the form of interest.

ICICI Bank’s deposits are almost 1.3 times that of Axis Bank indicating a high customer loyalty for the former.

Both the banks have been consistently growing their deposits over the years, however, ICICI Bank is slightly ahead of Axis Bank in terms of deposit growth.

In the last five years, ICICI Bank’s deposits have grown at a compound annual growth rate (CAGR) of 13.4% against 11.3% of Axis Bank.

For a bank, deposits are the primary source of funds. This is because a bank uses deposits to disburse loans and earn revenue in the form of interest.

ICICI Bank’s deposits are almost 1.3 times that of Axis Bank indicating a high customer loyalty for the former.

Both the banks have been consistently growing their deposits over the years, however, ICICI Bank is slightly ahead of Axis Bank in terms of deposit growth.

In the last five years, ICICI Bank’s deposits have grown at a compound annual growth rate (CAGR) of 13.4% against 11.3% of Axis Bank.

Ideally, a bank’s deposits and loans should grow at an equal rate. However, banks disburse fewer loans in the case of weak economic conditions to avoid bad loans on their books.

Axis Bank is leading in terms of growth of loans and advances with a CAGR of 10.7% in the last five years against a 9% CAGR of ICICI Bank.

Axis Bank’s growth in advances was led by growth in MSME and retail sector, whereas for ICICI Bank the growth was led by domestic advances, which was partly offset by overseas advances.

While both the banks couldn’t keep up with the pace of growth in their deposits, Axis Bank managed to keep the difference below 1%.

In terms of advances to deposit ratio both the banks have a five-year average of 92.6%. This means for every ₹100 they collect as deposits the banks are giving ₹92.6 as loans and advances.

An asset is marked as an NPA if it isn’t earning interest for more than 90 days. A rising NPA in the books of banks can be a cause of concern as it affects the bank’s profitability.

To gauge the level of NPAs on a bank’s books we can look at net NPAs. Net NPAs is a measure of non-performing assets as a percentage of total loans. The lower the percentage, the better.

The five-year average net NPA of ICICI Bank is 2.9% which is higher than Axis Bank’s average of 2%.

Though both the banks have a higher average, they have seen their net NPA reducing over the years mainly due to the stringent due diligence framework in place.

Banks are required to set aside provisions for the NPAs. This will help them in compensating for the money lost due to an NPA. Hence a bank should have enough provisions, despite it being a major expense that will drag down the profit.

By looking at the provision coverage ratio we can tell whether the bank has set aside enough provisions for its NPAs. It’s a measure of provisions upon gross NPAs.

The Reserve Bank of India has set a benchmark of 70% for the provision coverage ratio. Both the banks have set aside enough provisions for their NPAs in the financial year 2021.

Post the pandemic, both banks have proactively set aside higher provisions in case there is a surge in NPAs.

Capital adequacy ratio is a measure of capital the bank has against its risk-weighted credit exposures.

The Basel III norms mandate banks to have a minimum capital adequacy ratio of 12% so they have enough capital on reserve before facing insolvency risk.

The five-year average capital adequacy ratio for ICICI Bank and Axis Bank is 17.6% and 16.8% respectively. This indicates that both the banks have enough capital as a reserve.

ICICI Bank has an extensive network of customer touchpoints in the form of branches, ATMs, kiosks, and cash acceptance machines.

Dividend is the profit that is distributed to the shareholders in case the company has excess cash flows and no immediate expenses to pay for.

To assess the dividend-paying capacity of a bank, we can use two ratios – dividend payout ratio and dividend yield.

The dividend payout ratio measures how much dividend a company pays from its earnings. On the other hand, dividend yield measures what percentage of the share price is the dividend.

The higher the ratios, the better.

The five-year average dividend payout for ICICI Bank is higher at 11.7%,compared to 7.6% of Axis Bank.

In terms of dividend yield, ICICI Bank is leading with a five-year average of 0.4%, while Axis Bank has an average of 0.2%.

Two key return metrics for analysing a bank’s performance are return on equity (RoE) and return on assets (RoA).

Ideally, for banks, an RoA of 1% and above is considered good.

However, both banks have an RoA of less than 1%.

To compare both banks in terms of their valuation, we can use the Price to earnings ratio (P/E) and Price to Book Value (P/BV).

Price to earnings ratio is a measure of how much an investor is willing to pay for one rupee of earnings.

In contrast, price to book value is a measure of how much an investor is willing to pay for one rupee of book value.

In terms of P/E, Axis Bank has a higher value, indicating its shares are overvalued when compared to ICICI Bank.

However, currently, both the shares are trading lower than their five-year averages.

In terms of P/BV, ICICI Bank’s shares are available at a slight premium. The five-year average P/BV of ICICI Bank and Axis Bank are 2 and 2.1 respectively.

Due to the pandemic, banks saw low demand for loans and fee-based services which directly affected their revenue.

However, the RBI intervened and ensured there was enough liquidity in the system by reducing interest rates, placing moratoriums on loans for specific borrower segments, and providing a resolution framework for stressed assets. This helped the banks and economy survive the lockdown.

Both Axis Bank and ICICI Bank have been investing in digital technologies and hence they could roll out digital solutions and enable work from home so they could give their customers uninterrupted service.

However, once the lockdown restrictions were eased, the demand for loans picked up and the banks could revive at a good pace, ending the year on a positive note.

The banking system has a major role to play in ensuring sustainability.

ICICI Bank is reducing its resource consumption and is increasing the use of renewable energy sources at its branches. It is also concentrating on waste management and water conversation.

Besides this, it is lending to environmentally-friendly sectors and financed solar, wind, and hydro projects across India.

Axis Bank on the other hand is reducing its carbon footprint by increasing its efficiency in resource consumption, adopting green principles at its branches and using cloud technology to centralize their system to reduce power consumption.

It also has a Sustainable Lending Policy and Procedures (SLPP) that integrates environmental and social risk assessment into its lending decisions.

With an increase in the working population and rising disposable income, the demand for banking services will be high in India. This coupled with government initiatives such as financial inclusion will help in the growth of the banking sector.

Apart from this, with a surge of new fintech startups and the opening of new investment opportunities, the banking industry will see a surge in digital transactions.

However, banks should be more robust in leveraging technology to increase their digital business, which will not only help in acquiring new customers but also retain the existing ones.

Both ICICI Bank and Axis Bank at the forefront of leveraging technology. There are high chances that both banks will benefit from the growth of the entire industry.

However, Axis Bank is ahead of ICICI Bank in terms of growth in loan books and had slightly higher fee income and net interest margin indicating lower interest expense.

Though it is trading at a higher P/E than ICICI Bank, in terms of P/BV its shares are available at a discount.

Though both the banks seem to have strong financials, it’s always better to check the fundamentals and valuations of the company before making an investment decision.

Disclaimer: This article is for information purposes only. It is not a stock recommendation and should not be treated as such.

Note: Equitymaster.com is currently not accessible due to technical reasons. We regret the inconvenience caused. Meanwhile, please access our content on LiveMint.com. You can also track us on YouTube and Telegram.

(This article is syndicated from Equitymaster.com)