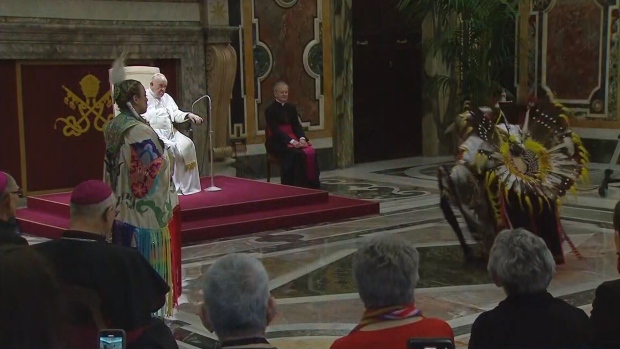 A world-famous dancer from Saskatchewan who performed in front of the pope on Friday in Rome called the moment “spiritual” and “very emotional”.

“It was an honor to be asked by Chief Bobby Cameron (from Witchekan Lake First Nation) to come and represent our people in Saskatchewan,” Kevin Haywahe told CTV National News’ Donna Sound in Rome. “It’s not just Saskatchewan, it’s even through Canada and the United States.”

Following private meetings between Pope Francis and First Nations, Inuit and Metis delegates this week, all parties met with the pope at the Vatican last Friday, where the leader of the Catholic Church issued an apology for the church’s role in Canada’s residential school system.

During his dance, as well as a sunrise ceremony outside the Vatican, Haywahe said he could feel the feelings of Pope Francis and other church leaders.

“We made eye contact, he and I, and I can see in him that he appreciated it, to teach us about our ways,” Haywahe said.

He also said he was happy to share more about indigenous culture and dance after performing on the streets outside the Vatican for people visiting from around the world.

Watch the full interview with Haywahe in the video at the top of this article.