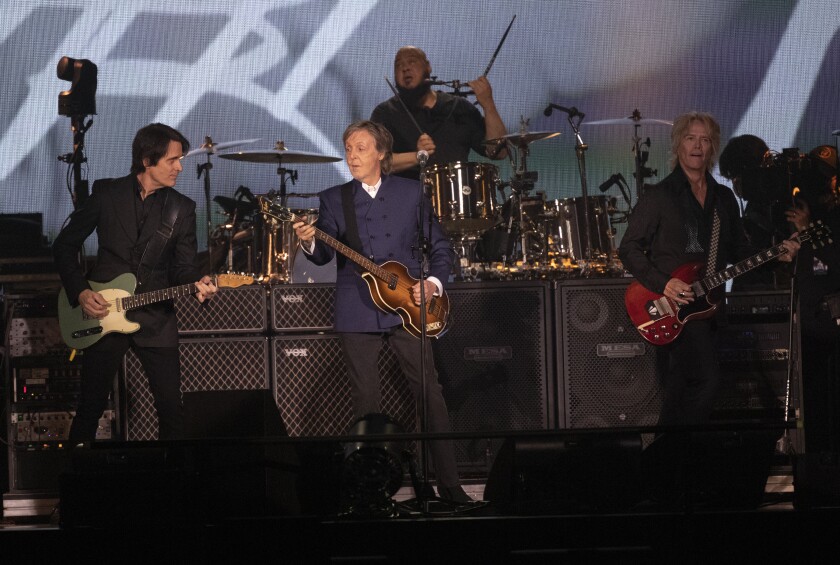 Even – or especially – in front of 50,000 admiring fans, Paul McCartney was just another proud grandparent.

When the 79-year-old pop legend sang his classic soft rock ballad “Maybe I’m Amazed” on Friday night, giant screens at Inglewood’s SoFi Stadium showed old pictures of him rocking his newborn daughter Mary in a jacket. You know the pictures, the most famous of which – taken by his late wife Linda, about whom he wrote “Maybe I’m Amazed” – appeared on the back of McCartney’s homemade solo debut in 1970, when he had retired to the bosom. of his family in the midst of the Beatles’ painful breakup.

“That baby in my jacket now has four babies of his own,” he told the capacity audience, in itself a clear bastion of grandparents, at the end of the song.

After more than half a century as one of music’s greatest acts, Sir Paul has a serious charm that remains his superpower. It’s not that he lacks a rock star. And “relatable” is probably not the word for a guy with more money than he could ever spend. But as an icon, what McCartney gets is that people long for art that creates magic from their everyday experiences.

Friday’s concert came a couple of weeks into McCartney’s first tour since a 2019 outing that ended at Dodger Stadium, where he brought out his old bandmate Ringo Starr for a surprise jam on the Beatles’ “Helter Skelter.” Called “Went Back”, the current 14-day excursion also marks McCartney’s return to the road after a long hiatus caused by COVID-19.

“We said we would come back,” he explained on SoFi. “And we came back.”

He was not directly out of sight during the pandemic. In late 2020, he released “McCartney III”, another DIY solo LP in the shabby-chic spirit of the 1970s album, as well as a book with his collected lyrics. And last year he helped launch a new wave of Beatlemania with “Get Back”, Peter Jackson’s epic documentary series about the creation of the band’s last two studio albums and its historic 1969 appearance on top of the Apple Corps building in London.

Still, the scene where McCartney seems most invested in managing his legacy as he prepares to turn 80 next month. (One week after his birthday, he will be the oldest person ever to lead England’s massive Glastonbury festival.) McCartney has long seen his live show as an opportunity to condense his life’s work – music with the Beatles, music with wings, music on its own – in a 2-hour study of crackling riffs, honey-filled harmonies and the kind of deep-rooted emotional optimism that made him accompany “Getting Better” on Friday with a video depicting flowers bursting through the rubble of a post-apocalyptic landscape.

Unlike some of his other classic rock survivors – Bob Dylan and Neil Young, let’s say – McCartney shows little interest in spontaneity or unpredictability, not to mention the confusion and confusion that Dylan seems to appreciate in his audience. Here he recaptured jokes between songs he has used for several years, such as when he told a story about meeting Jimi Hendrix in London in 1967 and when he introduced the title track from the 2013 “New” album with a joke about how the stadium’s galaxy glows. cell phones turned into a black hole every time he played something relatively recently.

During another of these new songs – the flaming “My Valentine”, which he dedicated to his wife, Nancy, who he said was at home last Friday – the screens showed Johnny Depp in black and white filmed before the actor’s involvement in an ugly legal battle over domestic abuse as you would have thought that the eternally sunny McCartney would have been happy not to conjure.

Aside from awkward associations, the unchanging live-museum quality of a McCartney gig is precisely its intended virtue; the show, backed by a band of faithful musicians he’s played with for ages, represents a chance to see someone still doing so at an extremely high level – and, of course, to live in his songs for an evening.

And, oh, those great songs: On SoFi, McCartney played no less than three dozen of them, including many you knew you wanted to hear (“Blackbird,” “Band on the Run,” “Hey Jude”), some you might not had realized that you wanted to hear (“Let ‘Em In”, “Nineteen Hundred Eighty-Five”) and at least one you definitely did not want to hear but still endured (“Fuh You”, about which less said the better).

“To let go” had an evil ostrich; “Let Me Roll It” was growling and sensual. “Get Back” throbbed with the pent-up energy of both the Beatles in Jackson’s doc and McCartney and his guys after an unwelcome break from the road. For “Live and Let Die,” the scene erupted with comically exaggerated pyrotechnics; “Ob-La-Di, Ob-La-Da” inspired a euphoric audience song.

In the middle of the show, McCartney and the members of his band gathered near the front of the stage for relatively stripped-down versions of the Beatles’ debut single, “Love Me Do” and “In Spite of All the Danger.” which he, John Lennon and George Harrison recorded when they were known as the Quarrymen.

To start his extra number, McCartney – who resurfaced on stage waving a huge Ukrainian flag while one of his bandmates waved an LGBTQ pride – used a little digital trick he said Jackson had joined him: a virtual duet with Lennon on “I’ve Got a Feeling” who used the late Beatles song from a recording of the concert on the roof. It was one of several moments last Friday when McCartney lovingly hailed his old bandmates, along with a tender rendition of “Here Today,” which he said told Lennon everything he could not in real life, and Harrison’s “Something,” which he began on the ukulele before switching to acoustic guitar.

Touchingly enough, McCartney’s age was more obvious here than at Dodger Stadium. He moved a little slower than he has done before, and his voice took a little longer to warm up. (His perfect hair, for what it’s worth, still swept just like that.) But to see these inevitable concessions as disadvantages is to miss the point with Paul McCartney. The point is, his music allowed them.