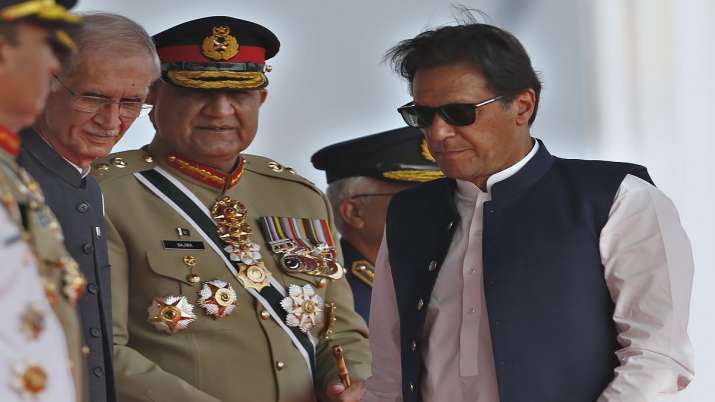 Prime Minister Imran Khan said on Friday that he had credible information that his life was in danger but said he was not afraid and would continue his fight for an independent and democratic Pakistan. In an interview with ARY News ahead of Sunday’s no-confidence motion in the National Assembly against him, Khan said the “establishment” (the powerful military) gave him three options – a no-confidence vote, early election or resignation as prime minister. He said that not only was his life in danger but that the opposition, which plays into foreign hands, would also resort to his character assassination.

“Let me inform my nation that my life is also in danger, they have also planned for my character assassination. Not only myself but my wife as well,” said the 69-year-old cricketer who became a politician. When answering a question about what options opposition gave him, Khan said he does not think he should talk to people like opposition leader Shehbaz Sharif.

“If we survive (the no-confidence vote) we can of course not work with these turnarounds (which left PTI to join the opposition), early elections are the best option, I will urge my nation to give me a simple majority so that I will not have to make compromises, “he said.

Khan called the opposition’s no-confidence motion a conspiracy and said he had known about it since August last year and that he had reports that some opposition leaders were visiting embassies. “People like Husain Haqqani met Nawaz Sharif in London,” he said. Khan reiterated what he said in a televised speech to the nation on March 31 that a foreign country not only expressed disapproval of his premiere but also demanded that he be ousted by a no-confidence vote so that Pakistan would be “forgiven”.

He said the foreign country opposed his independent foreign policy, ARY News reported. Khan said the “threat message” not only called for a regime change but clearly mentioned that he should be ousted as prime minister. Earlier, Pakistan’s Information Minister Fawad Chaudhry claimed on Friday that a conspiracy to assassinate Prime Minister Khan had been reported by the country’s security agencies, ahead of Sunday’s no-confidence motion against the prime minister. Khan’s security has been strengthened by the government’s decision following these reports, quoting the newspaper Dawn Chaudhry.

His statement came a week after similar allegations were made by Pakistani Tehreek-e-Insaf (PTI) leader Faisal Vawda who had said a conspiracy was hatched to assassinate Khan because of his refusal to “sell the country”. Vawda had commented on the ARY News show on a letter waved by Prime Minister Khan at PTI’s demonstration on March 27 here, claiming that it contained “evidence” of a “foreign conspiracy” to overthrow his government. Vawda said there was a threat to Khan’s life. However, he did not reveal whether the alleged conspiracy to assassinate the prime minister was mentioned in the letter.

Vawda also said that Khan was told several times that bulletproof glass needed to be installed before his hall at the rally on March 27, but he refused. Information Minister Chaudhry’s allegations also come a day after Khan, during his speech to the nation, promised to prevent “an international conspiracy” hatched against his government by opposition leaders and their alleged administrators ahead of the no-confidence vote in the National Assembly. In a speech to the nation, 69-year-old Khan discussed a “threatening letter” and called it part of a foreign conspiracy to remove him because he was not acceptable to pursue an independent foreign policy. He named the United States as the country behind the threatening letter in what appeared to be a stain.

Prime Minister Khan linked the letter to the no-confidence motion against him from the opposition in the National Assembly. The National Assembly is scheduled to vote on the declaration of confidence on Sunday. Khan’s speech came at a critical time in his political career when he lost the majority after leaving his PTI party. Two of his allied parties also withdrew their support and joined the opposition. The United States has said it has not sent a letter to Pakistan on the current political situation in the country because it sought to refute allegations of US involvement in the no-confidence motion against the Imran Khan-led government.

Khan met with President Vladimir Putin in the Kremlin on February 24, the day the Russian leader ordered a “special military operation” against Ukraine. Khan also became the first Pakistani prime minister to visit Russia in 23 years after former prime minister Nawaz Sharif traveled to Moscow in 1999.