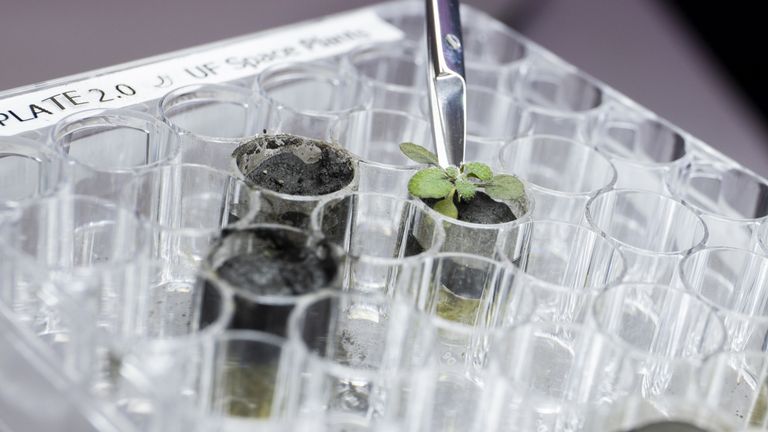 Plants have been grown in lunar soil for the first time – a milestone for lunar and space exploration.

Researchers from the University of Florida found that cress, Arabidopsis thaliana, can successfully germinate and grow in soil collected from the moon.

The findings may lay the groundwork for growing plants that supply food and oxygen to the moon.

Rob Ferl, one of the co-authors of the study, said: “Showing that plants will grow in lunar soil is actually a big step in that direction to be able to establish ourselves in lunar colonies.”

Although Arabidopsis is edible, it is not good. The plant belongs to the same family as mustard, cauliflower and broccoli.

Anna-Lisa Paul, another co-author of the study, said: “The plants that reacted most strongly to what we call oxidative stress reactions, they are especially in the Apollo 11 samples, they are the ones that turned purple.

“It’s the same in blueberries and cranberries.”

The discovery comes as NASA plans to return humans to the moon as part of the Artemis program later this decade.

The researchers added water, light and nutrients to 12 grams of lunar soil while analyzing the growth.

Read more:
First image of a massive black hole in the center of the Milky Way galaxy revealed
NASA releases recording of a black hole – and it sounds like a Hans Zimmer result

The team applied to Nasa three times in 11 years to get the opportunity to work on the test and only got it 18 months ago.

Although all plants germinated, some were of different colors, sizes and grew more slowly than others. To make comparisons, some was planted in soil from the soil.

The study was published in the journal Communications Biology.