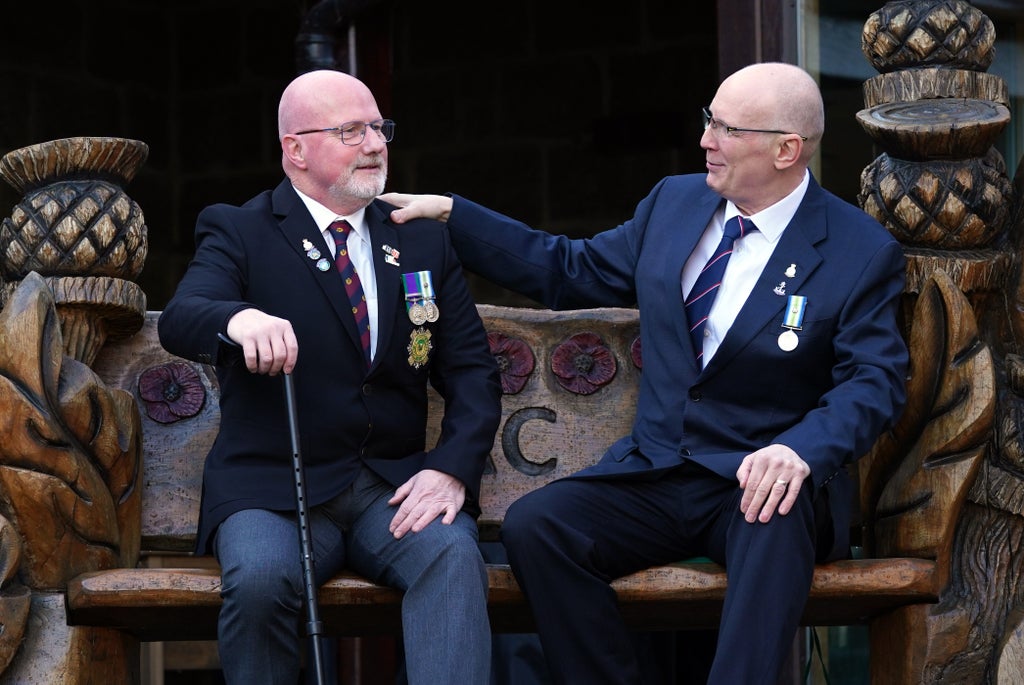 Two veterans, whose paths crossed when they fought during the Falklands War, have been reunited four decades later.

Bill McDowell, 60, and Norman McDade, also 60, met for the first time since the 1982 conflict in a home in Bishopton, run for veterans by the charity Erskine.

The couple, who both now live in Erskine, probably encountered each other during a transfer of British troops to ships heading into battle under the Falkland Islands.

They decided to reunite to mark the war’s 40th anniversary on Saturday.

Mr McDade, who prefers to go by the name Mac, joined the Royal Navy at the age of 17 in 1978 and trained as a chef.

But when war broke out between the British and the Argentines, Mac and his crew aboard the HMS Plymouth were ordered to head to the South Atlantic to fight.

When not avoiding bombs and defending troops against fighter jets, the Navy’s cook who became a shooter was involved in assisting with the transport of soldiers arriving from Britain to ships going into combat.

On May 27, Queen Elizabeth 2 (QE2) arrived in South Georgia with the 5th Infantry Brigade, including Mr McDowell, a member of the Scots Guards.

The troops were then transferred to smaller vessels, including Plymouth and HMS Intrepid, to be transported to eastern Falkland.

It was here that the two were believed to have encountered each other for the first time.

“There’s definitely a possibility that we waved at each other or saw each other at this point,” Mac said.

“It’s not always easy to recognize everyone because we all look a little different now, most of us probably have less hair.”

Speaking of his memory of the transfers between boats, McDowell said he was “reduced to tears” on several occasions.

“In the boats, most of us sat crouching, on our knees or sitting in icy water that gathered at the bottom, sometimes it was so cold that I could barely hold my rifle,” he said.

“There were several ship-to-ship transfers, as QE2 could not be exposed to risk.”

He said on June 5 that the troops boarded the HMS Intrepid, an amphibious vessel used by the Royal Marines and en route to Bluff Cove.

It was from HMS Intrepid that we were launched, crammed into a couple of landing craft for what could only be described as a night of icy cold and wet hell.

“The whole night was spent in the biting icy, coal-black, South Atlantic winter.

“The flat-bottomed ships were thrown mercilessly into the waves and every time the boats’ bows broke, the icy water came pouring into the boat and rushed over – there would be a collective panting when the water hit us.”

When the 2nd Battalion Scots Guards landed at Fitzroy, a settlement in eastern Falkland, on June 6, McDowell and his comrades continued to fight at the Battle of Mount Tumbledown a week later.

On 13 June, the bloody conflict, with hand-to-hand fighting, led to the deaths of nine Scottish Guards and 47 wounded.

“I still have a hard time talking about the moments that changed my life forever,” McDowell said.

“I was confused, scared and far from home.”