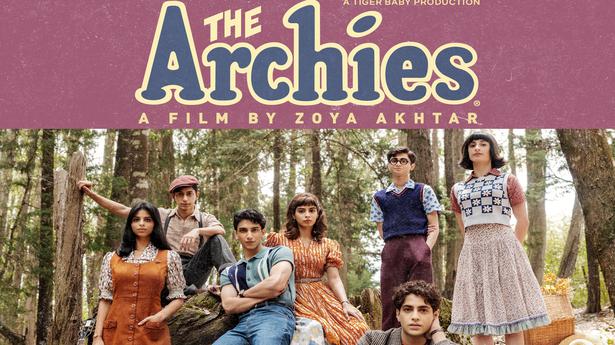 Mihir Ahuja, Dot, Yuvraj Menda and Vedang Raina also star in the project, which will be released on Netflix 2023

Mihir Ahuja, Dot, Yuvraj Menda and Vedang Raina also star in the project, which will be released on Netflix 2023

Suhana Khan and Khushi Kapoor, daughters of superstar Shah Rukh Khan and late Bollywood actress Sridevi, and Agastya Nanda, grandson of megastar Amitabh Bachchan, are among the seven actors who will star in the live-action musical.

Akhtar took to Instagram and shared a teaser video, which revealed the cast of the film, which takes place in the 1960s.

“Is nothing like old school. Grab your gang because Archies is coming soon on @netflix_in!” she wrote in the caption.

The filmmaker also revealed the official poster for the film in another post, writing: “Get ready to take a trip down memory lane for The Archies coming soon only on @netflix_in”

Netflix has partnered with Archie Comics for the project, which Akhtar and her longtime collaborator Reema Kagti are producing under their banner Tiger Baby.

“The Archies” will be released on Netflix 2023.

On social media, the three star children received congratulations from their family members.

Suhana Khan’s mother Gauri Khan shared the film’s teaser on Instagram and gave a shout out to all seven actors.

Janhvi Kapoor also shared a heartfelt message to his younger sibling Khushi Kapoor, praising the newcomers for working tirelessly for months to create “this world, find these characters to start living this journey”.